Dr. Chido Nwangwu, the Founder of USAfrica multimedia networks since 1992 in Houston, is television/print/web/wireless/ multimedia executive, cross-cultural business and emerging markets specialist and an artist.

He is the recipient of the Journalism Excellence Award (NABJ 1997), and 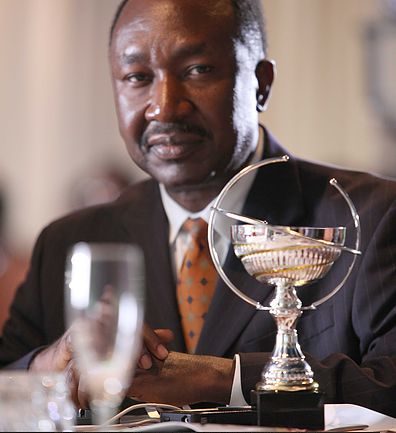 The authoritative assessment of the impact of his works on the business, news, public policy, international security and cultural exchanges between Africans and Americans, pointed to the transformational leadership record of Dr. Nwangwu by noting that “We must remember that one determined person can make a significant difference”, as precisely articulated by Sheila Jackson Lee, member of Congress, representing the 18th district of Texas, who seats on the influential Committee on the Judiciary and the Committee on the Budget; Subcommittee on Crime, Terrorism, Homeland Security, and Investigations; the Subcommittee on Counterterrorism and  Intelligence; and co-chair of the Congressional caucus on Nigeria.

USAfrica, characterized by the CNN and The New York Times as the largest (and arguably, the most influential African-owned, U.S-based multimedia networks.. He is the author of the soon-to-be-released 2019 book, MLK, Mandela & Achebe: Power, Leadership and Identity.

He has appeared as an analyst on the the Voice of America/WorldNet and the Black Entertainment Television (BET), as well a number of local U.S. tv and radio stations.

Chido Nwangwu was the only continental African publisher/reporter who traveled with and covered U.S. President Bill Clinton’s historic visit to parts of Africa, March-April 2, 1998; and covered Clinton’s visit to Nigeria in late August, 2000. He was the only Africa/African-American Publisher who reported from inside the joint seating of the U.S Congress during Liberia’s president Dr. Ellen Johnson Sirleaf”s historic speech in March 2006.

Chido has been honored by the Washington-D.C.based National Immigration Forum for utilizing the media to fight authoritarianism and fostering freedom of expression in parts of African continent. He has served on the board of the Houston chapter of the NAACP.

Chido is the first continental African to be admitted to the 100 Black Men of America.

In his unrelenting, pioneering quest for excellence and extending the frontiers of African content/narrative/views/agenda to global information exchanges, Chido Nwangwu established the 1st African-owned, U.S.-based professional newspaper published  on the internet USAfricaonline.com. USAfrica Inc was established May 1992, first print edition of USAfrica magazine published August 1993; USAfrica The Newspaper on May 11, 1994;  CLASSmagazine  on May 2, 2003;  PhotoWorks.TV in 2005, and several platforms and products. USAfricaonline.com is powered by the global resources of USAfrica, CLASSmagazine, CLASSmagazine.TV, PhotoWorks.Tv, USAfrica.TV, MLKMandelaAchebe.com, AchebeBooks.com and ChidoNwangwu.com

USAfrica The Newspaper was voted the Number One community newspaper in Houston (the 4th largest city in the U.S.) in the annual ranking by the readers and editors of the Houston Press in 2001.

The flagship of American media, The New York Times of September 23, 2003, noted that USAfrica is America’s largest African-owned multimedia company. The New York Times’ reporter Simon Romero wrote that Chido “Nwangwu recently created a magazine called Class for affluent Africans in the United States.” To be sure, it’s not only for the affluent but the willing and deserving. CLASS is the Africans-in-America’s own Ebony and People and GQ – all rolled into one unique product: an ultra-glossy magazine of African style, music, living, fashion and our younger generation interests. He calls the latter group ‘generation Class.’ CLASS is the magazine for successful, pioneering and exemplary Africans in America.

In 2005, he established one of the most vibrant Africa community e-groups/blogs/community calendars for sharing info/announcements of upcoming and special events, insight to significant dates, festivals, events, resolutions/communique and historic milestones involving (or relevant to) persons, organizations and groups of Nigerian descent Nigeria360, the blog for the Igbo pan-African heritage, called IgboEvents; an Anglican community blog, AnglicanAfrican, and more. They are all powered by the resources of USAfrica and USAfricaonline.com.

Chido Nwangwu speaks at colleges and businesses on technology issues, especially how the unfolding the digital world and the Internet affect Africans, African-Americans and recent immigrants. He served as a panelist at the 2000 British Broadcasting Corporation/Public Radio International global technology forum in San Francisco, California.

He served on the editorial board of the Daily Times of Nigeria in 1989 into early 1990s; 1988-1989 assistant editor of the Platform magazine, African and The World journal. He began his professional career as a very young man in the news, sports and programs production/camera/editing departments of the Nigerian Television Authority in 1980. He contributes to The Mail and Guardian of South Africa, Houston Chronicle, and numerous U.S.-based and Africa issues publications.

In recognition of his engaging and pioneering digital design work on USAfricaonline.com and other web sites, Chido was voted the #1 African-American web designer in 1997 by the Houston Association of Black Journalists. He has since conceptualized, designed and maintained a number of web sites, including private corporations and such governmental sites as the Abia State of Nigeria first web site in 2001.

Nwangwu is author of the 1993 special report, Clinton’s Africa. He is writing a book on the experiences of recent African immigrants in the U.S.

He has been profiled in the Houston Chronicle (8th highest circulated newspaper in the U.S.), the Orlando Sentinel, Mail and Guardian of South Africa, and a number of other publications. Some of Chido Nwangwu’s works, bio-data and context of his writings were profiled in February, 2001 in a report in the Houston Press by prolific essayist and reporter John Suval.

He is the convener of the annual inter-denominational USAfrica Prayer Breakfast, which holds at 9am prompt on the last Saturday of every January, of every year, since 1999.

He serves on the advisory board of several community building and international organizations including EVA (Education as Vaccine against AIDS-based in Nigeria and the U.S). Chido has a son, Chido Nwangwu (the 2nd) and a wife, Chinwe Nwangwu.

View all posts by Authoritative